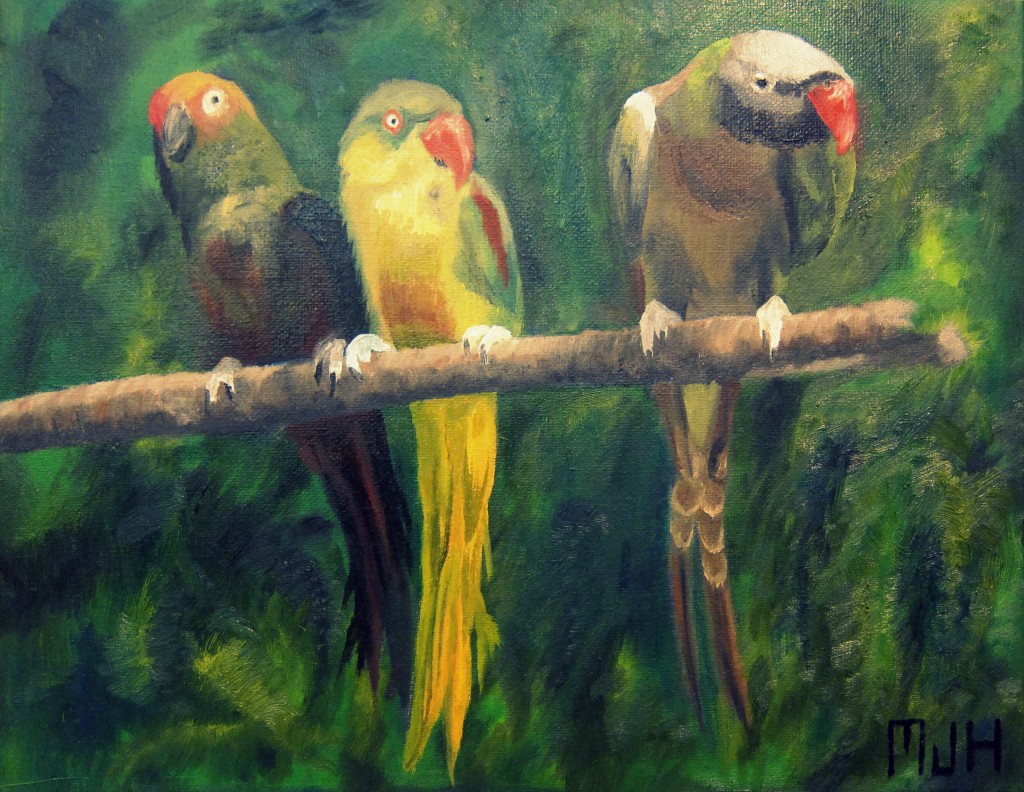 Reply to a friend, who enjoyed my painting, and commented on what subconscious thoughts it might represent:

Thanks, I’m glad you like it. Like most of the art I’ve made lately, I have no idea how it comes together. I’ll have strong doubts about a particular piece (in this case “this one is not going to be that great, it’s already pretty messed up; that’s okay, I’ll just work harder on the next one”) and then somehow it does come together at the end, without me knowing how.

I feel like a lot of art is accident. A shifted line here, something slightly off there. For this painting, I was looking at a photo, but obviously it’s not a photographic copy; things came out differently. For example, in the big bird, the beak is pointing outwards more (showing more attitude), the bird is bigger (fatter; particularly due to the right-side wing, which I “misplaced” because of its position relative to the also-misdrawn beak), the middle bird looks a little bit angry, etc. The emotions are shifted by the subtle differences in strokes, which was unintentional. But you point out, subliminal? I have no idea. I can’t discount it, but I can also say that my mood while painting this was kind of about “just getting through the painting” so I could move on, while also hanging out with people who were in our little class. Towards the end I stepped back and was surprised that it actually was starting to look okay, so I put more effort into the remaining details. I think a lot of art is like that: accidental, as much as we like to think the artist was in complete control and every stroke’s meaning was intentional. And a lot of art doesn’t get made because of self-doubt in the mind of the would-be artist, because of that lack of control. This experience as a whole aligns with my belief that anyone can learn to create art; that it’s not about “talent” but about other things entirely.

Subliminal encoding or accident? We’ll never know! One thing I’m pretty sure of, though, is that whatever is encoded in it, it’s not a reflection of only one thing or one scenario or relationship.